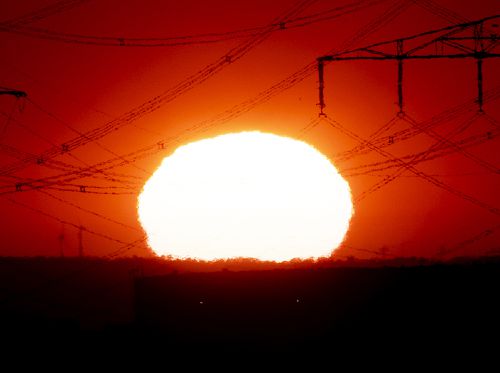 Ferries have been cancelled in Sydney due to the smoke haze while Sydney Trains has warned the fire alarms at train stations may be triggered.

The smoke has come from bushfires burning about an hour away.

At its worse, air pollution in the city centre was 11 times worse than "hazardous" levels.

A 60 km (37.2 miles) firefront is devastating tinder-dry areas northwest of Sydney, Australia's largest city, and sending hazardous smoke across the east and over the Pacific, even causing haze more than 2,000 km (1243 miles) away in New Zealand, satellite images show.

People wear face masks to protect from the pollution around Sydney. Sydney is suffering from "some of the worst air quality" its ever seen, according to Dr Richard Broome of the New South Wales Health department.

Residents in parts of eastern Australia abandoned their homes on Tuesday as soaring temperatures and strong winds threatened to fan bushfires in a giant blaze north of Sydney, the country's biggest city.

According to the New South Wales Rural Fire Service (NSWRFS), there were 89 fires burning across the state as of 5.30am.

Marvin Miller, Ted Simmons elected to Baseball Hall of Fame
Simmons is also one of only 10 catchers to have been worth at least 50 career WAR, according to Baseball-Reference . These eight players will again be eligible for consideration during the next Modern Era vote in December 2022.

Jets won’t discipline Bell for bowling after flu absence
Gase acknowledged at a press conference Tuesday that Bell's bowling trip was a questionable decision given his health status. Gase also explained he didn't want Bell coming to the team hotel either - "The locker room was still contagious".

Protests in India over bill fast-tracking citizenship for non-Muslims
In Assam's Kamrup district, authorities imposed an order restricting gatherings of two or more people amid fears the violence could escalate.

Amid mounting public anger, Australia's Liberal-National government defended its policies in addressing climate change and downplayed links between climate change and the unprecedented early arrival and severity of the fires "Certainly, climate change is a factor, there is no question, but also it is important to note that most of these fires have been caused by "Little Lucifers", Australia's Deputy Prime Minister Michael McCormack told ABC, referring to arsonists.

The Sydney Opera House is barely discernible through the thick haze enveloping the city.

"We are just urging people once again to take these (conditions) seriously".

In addition, the New South Wales Ambulance Superintendent Brent Armitage announced Tuesday that the service has been responding to dozens of calls a day related to respiratory health issues.

Many are slamming the government for their response to the crisis, and their wider denial that we need to take better action against climate change.