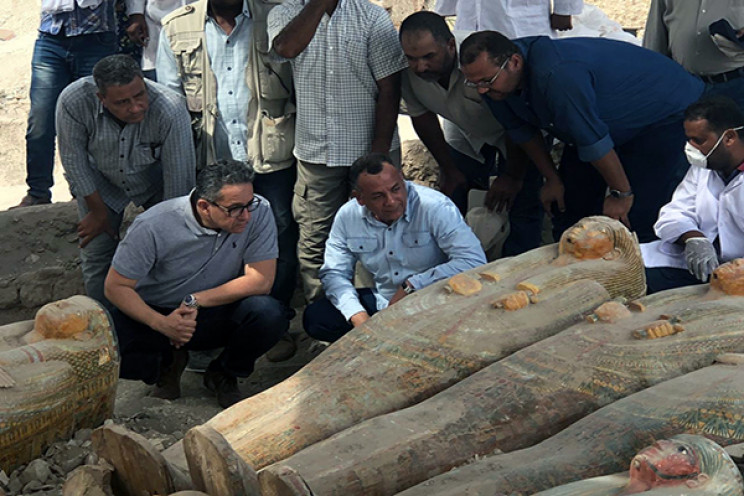 Archaeologists in Egypt have excavated more than 20 ancient wooden coffins in what is being reported as one of the most important discoveries in recent years.

According to CNN's Oscar Holland and Taylor Barnes, researchers discovered the coffins in Al-Assasif, a necropolis on the Nile River's West Bank. The site once formed part of the ancient city of Thebes, the ruins of which are found in present-day Luxor.

The images that were shared with the public showed Khaled El-Anany, the antiquities minister of Egypt, examining the coffins with Dr. Mostafa Waziri, the alongside Supreme Council of Antiquities' secretary-general.

Most of the tombs at Asasif, which is close to the Valley of the Kings, are from the Late Period (664-332BC) of ancient Egypt.

An archaeological mission has been underway in the Valley of the Kings since December 2017, in step with the Antiquities Ministry.

Archeologists have uncovered almost two dozen sealed coffins in the Egyptian city of Luxor, found "as the ancient Egyptians left them", the country's Ministry of Antiquities announced on Tuesday.

"The decoration of the coffins says a lot, as if you didn't have a tomb your coffin would be well decorated, in earlier periods you would have obviously had a tomb", senior lecturer in Egyptology at the University of Liverpool, Dr Roland Enmarch said. Ancient industrial area also found Saturday's news conference also comes one week after the ministry announced the discovery of an ancient industrial area, firmly dated to the 18th Dynasty, in the Valley of the Monkeys in Luxor's West Valley.

According to a government statement, the team unearthed 30 workshops, many featuring pottery dating to the 18th dynasty. Researchers came upon a kiln for producing pottery and steel, where objects equivalent to silver rings and gold foil luxuriate in been moreover uncovered.