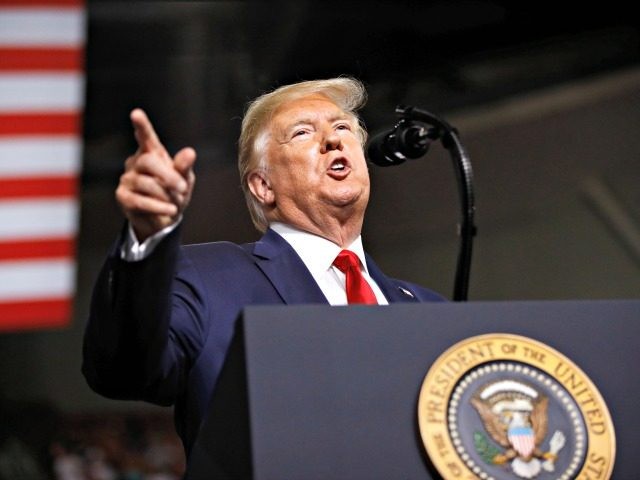 Stocks crawled higher in morning after a deeper selloff overnight, trailing news that a representative at China's Ministry of Foreign Affairs, said China "hopes the US will meet China halfway and implement the consensus reached by the two leaders during their meeting in Osaka", generating a positive outlook for a resolution between the two countries.

US government bonds have been among the loudest and earliest to cry out warnings about the economy.

The S&P 500 rose modestly in morning trading and clawed back a fraction of its steep losses from the prior day, when stocks tumbled after the bond market sent out a fairly reliable warning signal of recession. Even after the slide in yields eased Thursday, the USA bond market continued to show concern as yields ended broadly lower.

That news arrived after China initially said it has to take necessary countermeasures for the latest USA tariffs on $300 billion of Chinese goods, adding the us tariffs violated a consensus reached by leaders of two countries, which drove the market lower overnight.

"What you're seeing really is what's been driving the market the last couple of weeks: Trade tensions as well as yield curve stress", said Lindsey Bell, investment strategist at CFRA.

Tariff sensitive chipmaker, which staged a comeback a day earlier, were also down.

Other indexes didn't catch the bounce.

Traders are betting on a one-in-five chance of a 50 basis point interest rate cut from the Federal Reserve, while expecting aggressive easing from the European Central Bank at its policy meetings in September.

In the U.S., Walmart shares surged 4.4% and helped to steady the market after it said it made a bigger profit in the last three months than Wall Street expected, thanks in part to strong online sales of groceries.

Several other major economies, including Japan, Germany, Italy and the United Kingdom, appear to be heading toward recessions, and China is growing at its slowest pace in three decades. In late trading Thursday the 10-year yield stood at 1.52 percent.

Canada's Trudeau rebuked on ethics ahead of election
SNC wanted such a deal because, if criminally convicted, it would face a 10-year ban on bidding for federal contracts. Wilson-Raybould's replacement as attorney general, David Lametti, has so far only said he is considering the issue.

Government promises at least $150m for Pacific climate change projects
The Australian leader has conceded climate change is real but argued it can be managed in a way that does not hurt the economy. A delegation led by Minister of Foreign Affairs Joseph Wu (吳釗燮) yesterday arrived in Tuvalu for the Pacific Islands Forum .

'I don't want guns in the hands of a lunatic'
AP reporter Mary Clare Jalonick and congressional correspondent Lisa Mascaro contributed. A House Judiciary spokeswoman did not immediately respond to a request for comment.

The yield on two-year and 10-year Treasury bonds inverted for the first time since June 2007.

Banks, which have lost almost 8 per cent this month pressured by tumbling bond yields, were the top gainers on Friday up 2.4 per cent to log their best session since early April. When investors worry about weaker economic growth and inflation, they tend to pile into Treasurys, which pushes up their prices and in turn pushes down yields.

Former Fed Chair Janet Yellen said the markets could be wrong in anticipating a recession because of the yield curve inversion.

He has pledged to win a trade war with China popular with voters in Rust Belt states that were crucial to his 2016 victory.

Companies' reluctance to invest amid the uncertainty of the trade war, has already slowed growth.

"Exhausted traders the world over head into the weekend in a more buoyant mood", said Craig Erlam, senior market analyst at OANDA.

All of the 11 major S&P sectors were higher, with technology stocks providing the biggest boost.

General Electric sank 9.5% on news that the industrial conglomerate is being accused of hiding its financial problems by Harry Markopolos, the prominent whistleblower known for outing Bernie Madoff.

The Dow dropped by 3 percent, more than 800 points, Wednesday after fears of a recession emerged.

AMS, Infineon Tech and STMicroelectronics rose between 1.2 per cent and 2.1 per cent.