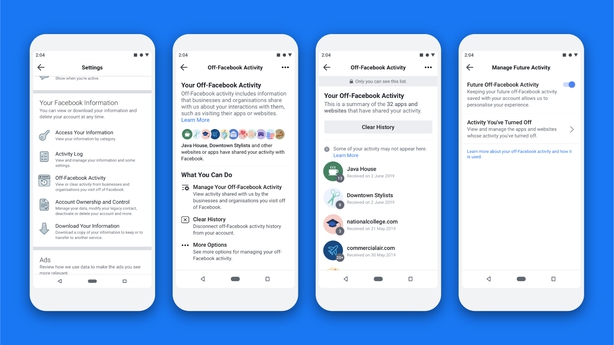 Soon, you could get fewer familiar ads following you around the internet - or at least on Facebook. Facebook said users will be able to use the tool to see and control the data other apps and websites have shared with Facebook.

A feature in settings called Off-Facebook Activity will show all the apps and websites that send information about you to Facebook, which is then used to target ads more effectively.

According to Facebook, the new Off-Facebook Activity tool will allow users to see which companies are sending their personal data back to Facebook, and remove the apps and websites that they want to be no longer sharing data. If there's anything you don't like, you can cut off the connection for the specific website or disconnect all the activity from your Facebook account.

Not yet. Users in Ireland, South Korea, and Spain will have access to the tool first. "We expect this could have some impact on our business, but we believe giving people control over their data is more important". Facebook says that you'll be able to do that for all your off-Facebook activity, or just for specific apps and websites.

Previously it was impossible for users to see which companies had sent information to Facebook.

Jasmine Enberg, social media analyst at research firm eMarketer, said the tool is part of Facebook's efforts to be clearer to users on how it tracks them and likely "an effort to stay one step ahead of regulators, in the USA and overseas".

Attendees walk past a Facebook logo during Facebook's F8 developers conference. The new tool shows users a list of businesses that have shared information with Facebook and details of how many times they have done so.

Feds move to dismiss Jeffrey Epstein's sex-trafficking indictment
The lawsuits say two women were 17 and the third woman was 20 when they said they were sexually assaulted by Epstein . The last will and testament of the convicted sex offender and accused sex trafficker named lawyer Darren K.

The move follows other recent changes Facebook has made to give users more control. The company recently paid a $5 billion fine to the USA government in connection with the data leak, which amounts to about a month's worth of income.

What is "Off-Facebook Activity" and how does it work?

If you decide on the nuclear option, and request to disconnect all off-site activity from Facebook, the social network will nevertheless still collect the data, but in aggregate form.

"We won't know which websites you visited or what you did there, and we won't use any of the data you disconnect to target ads to you on Facebook, Instagram or Messenger", reads an explanation of the tool provided by Facebook.

Is it available to Canadian users? In July of 2019, the company agreed to change its practices regarding the handling of user data, as well as pay a $5 billion fine to the Federal Trade Commission for privacy violations.

BuzzFeed News had a piece in February that was based on interviews with former Facebook employees who all said that Zuckerberg's new push toward private interactions was mostly about optics - and the fact that the "clear history" feature was still nowhere to be seen nine months after it was promised was more proof of this.