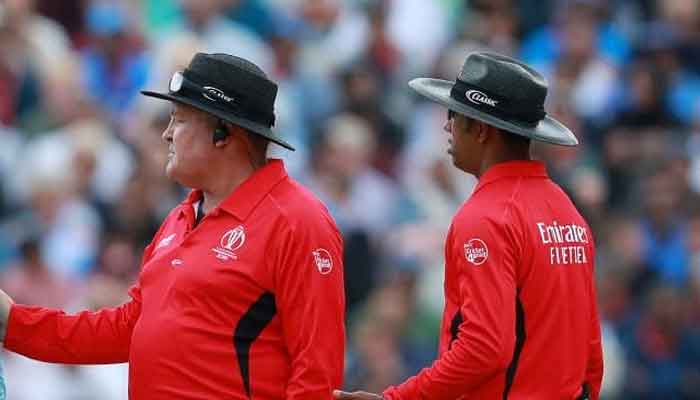 Dharmasena and Erasmus will be the on-field umpires.

Sri Lanka's Kumar Dharmasena and Marias Erasmus of South Africa were Friday appointed as the on-field umpires for the World Cup final between hosts England and New Zealand at the iconic Lord's on Sunday.

In fact, it was Dharamasena who gave a contentious decision against England's Jason Roy in Thursday's second semi-final at Edgbaston.

Roy top-scored in England's eight-wicket win in the semi-final, passing 50 for the third consecutive time since returning from a hamstring injury.

"Roy has been fined 30% of the match fee after admitting the offence and sanction, with no formal hearing to take place. He won't face any suspension".

Armed man shot dead after attacking U.S. immigration jail
The planned raids come me at a time of intense scrutiny surrounding ICE and the treatment of migrants at detention centers. The officers involved, who were not injured, retreated, and "medical aid was staged" nearby, according to police.

Dharmasena has won the ICC's Umpire of the Year award twice - in 2012 and 2018 - but also holds an unwanted record involving England.

Cowan said it didn't matter if Dharmasena was uncertain about what decision to make before raising his finger, because once the umpire gives you out, that's the end of the discussion.

"Realistically, he should be given a one-match ban", Cowan told ABC Grandstand's World Cup podcast. Dharamsena was wrong in giving Roy out and it led social media to run a campaign to remove the umpire from the final. Roy could not contain his disbelief when the Sri Lankan gave him out caught behind off Pat Cummins 15 runs shy of what would have been a 10th one-day worldwide hundred, and was subsequently hit with two demerit points on his record following England's brilliant eight-wicket win over Australia at Edgbaston.

But ICC's selection of umpires for what is admittedly the most important ODI game of the year, did not sit well with fans after Kumar Dharmasena got involved in a controversial situation on Thursday, 11th July during the England-Australia semi-finals.