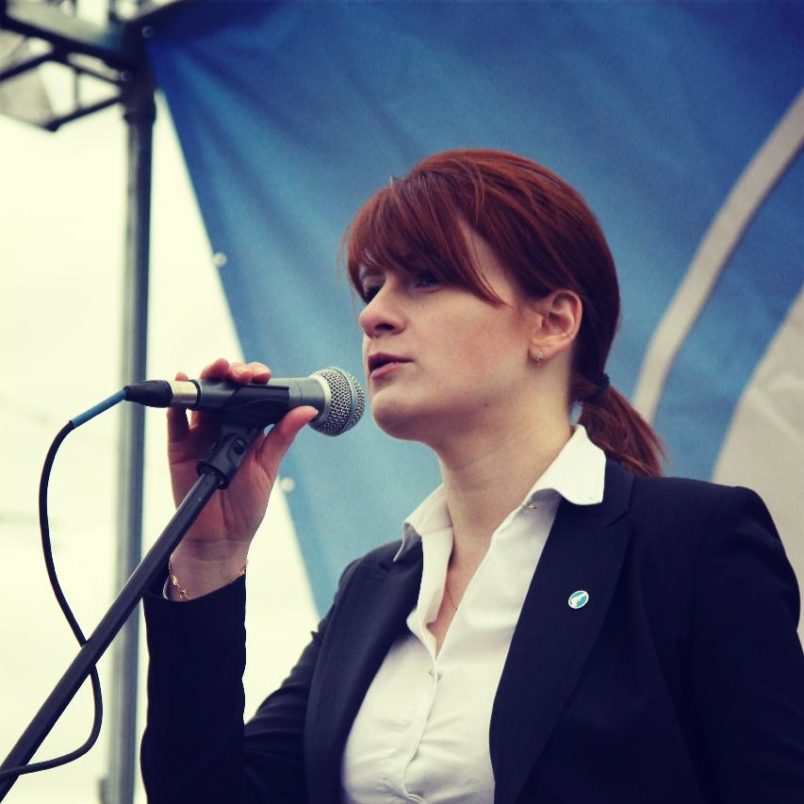 A former associate involved in President Donald Trump's presidential campaign socialized and invited Maria Butina, a woman charged with operating as a Russian spy, to a Styx concert and his birthday party, according to a report by The Washington Post.

Gordon and Butina exchanged emails in September and October 2016, just ahead of the presidential election, The Post reports. He included a link of a recent appearance he'd made on RT, a Russian state-run news agency, The Post reported.

The Post says the new information puts Butina in closer contact with the Trump campaign than was previously known. They didn't have any additional contact after Gordon's birthday party in October 2016, according to Robert Driscoll, Butina's attorney. She is accused of carrying out a covert influence campaign, befriending prominent USA conservatives and infiltrating organizations like the National Rifle Association.

"From everything I've read since her arrest last month, it seems the Maria Butina saga is basically a sensationalized click bait story meant to smear a steady stream of Republicans and NRA members she reportedly encountered over the past few years", he said in a statement to the paper.

Lost World War II markings "EIRE" in Ireland revealed by wildfire
The gorse fire has been burning in the area for the past three weeks, but the sign was only revealed when the smoke cleared. The Defence Forces Air Corps noticed the landmark from above while assisting emergency services as they put the fire out.

56 injured after lorries explode in motorway crash in Bologna
Italian media said a truck carrying cars collided on a bridge with another tanker truck containing explosive materials. A truck has exploded in a huge fireball on a motorway near Bologna , northern Italy , following a traffic accident.

Bangladesh police fire tear gas to disperse students protesting against road deaths
In order to prevent tragic incidents like these happening in the future, students took to the streets to campaign for road safety. Authorities have pleaded with students to call off the protests that have almost paralyzed Dhaka and spread beyond the capital.

O'Neill could not be reached for an interview, but he wrote about the dinner on the same conservative website, saying it involved "former and current and Russian officials with a number of prominent U.S. Republicans and conservatives". He also insists he did no official work for the Trump transition team.

Accused Russian operative Maria Butina asked a judge to dismiss a USA indictment charging her with acting as an unregistered agent of the country and appealed an order denying her release from custody. Gordon has not been interviewed by any investigators for Mueller or the Federal Bureau of Investigation about his contacts with Mariia Butina, he said. Gordon "would be an excellent addition to any of the U.S./Russia friendship dinners to occasionally hold", Erickson added. In the RT interview, Gordon said Trump took a "real common-sense approach to Russian Federation".

Including Gordon, at least 12 members of the Trump campaign or transition team have now acknowledged interacting with Russian nationals before or after the election. Gordon instead offered an extra ticket to a Styx concert, which he was attending that week.

Labour's anti-Semitism row: Jeremy Corbyn apology
The stance has been backed by Mr Corbyn, who has also vowed to root out anti-semites from Labour ranks. "You are not our supporters", he said. 8/06/2018

Transfer: Ernesto Valverde breaks silence on Paul Pogba's 'move' to Barcelona
And with just three days until the close of the transfer market in England , Barcelona have very little time to close a deal. Pogba made 37 appearances in all competitions for Manchester United last season. 8/06/2018

Transfer: Chelsea tell Real Madrid to pay 225m for Hazard
This development was revealed by English football presenter, Richard Keys. The 59-year-old Italian's style has been likened to Pep Guardiola's . 8/06/2018

IL kicks off annual Barack Obama Day, Aug. 4
August 4 is Barack Obama's birthday and it's marking the first Barack Obama Day in IL . The original bill would have called for schools and state offices to close. 8/06/2018

Apple pulls Infowars podcasts from iTunes
The theories he has promoted include that the September 11, 2001 attacks on NY and Washington were staged by the USA government. The move by Facebook is the latest crackdown on Jones, who has recently had content removed from other platforms. 8/06/2018

Google Blocks Crypto Mining Apps In Play Store
With a lesser focus on the affiliate programme, commissions for iOS and Mac apps and in-app content will soon be removed by Apple. Apple claims that the modifications to the iOS and Mac App Stores have ensured more methods of driving app discovery. 8/06/2018