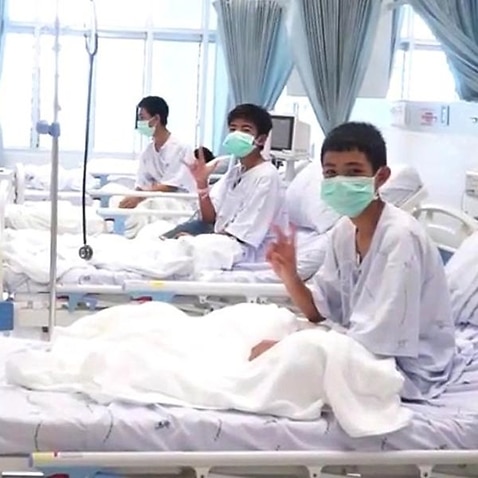 Divers found the group after nine days inside the flooded cave, but needed to rehearse the rescue because of treacherous conditions through the cave's 2.5 mile (4 kilometer) long passages.

Though the group are healthy and in good spirits, they remain in an isolation ward waiting for the medical all-clear after more than two weeks stuck deep underground in an environment where they could have been exposed to nasty diseases.

British cave diver Richard Stanton arrives at the Tham Luang cave area as rescue operations continue for the 12 boys and their coach trapped at the cave in Khun Nam Nang Non Forest Park in the Mae Sai district of Chiang Rai province on July 6, 2018.

Mr Stanton, from Coventry, spoke as he returned to the United Kingdom on Friday morning along with some of the other British divers who took part in the search and rescue mission. Searchers later found what they thought were the boys' handprints, giving them confidence the boys were alive and that the searchers were on the right path.

"We have two obstacles: water and time", he said this past Sunday, as rain began to fall across the site near the cave entrance. They will stay in hospital at least a week. "They are children being children, it was an accident", he said. "So there was relief, tempered with uncertainty".

The head of a Thai navy SEAL diving team that helped lead 12 boys and their soccer coach through a flooded cave complex to safety urged the boys on Thursday to "be a force for good" as the dramatic operation wound to a close.

He denied he was a hero and said he was using a "very unique skill set" to "give something back to the community".

Conor McGregor given freakish sculpture for 30th birthday
The artist admits that he hasn't actually spoken to McGregor directly, but has been communicating with him through a friend. He claimed the Ultimate Fighting Championship's featherweight and lightweight titles before trying his hand at boxing .

"But it's really the worldwide team I would like to focus on and the Thai SEALs".

"But it was what they faced, and what they had to do in there, which was extraordinary". Anderson said one of the most crucial pieces of equipment was the positive pressure diving masks, which would expel water from the mask if one of the boys panicked.

'There is a lot of responsibility, that is all I am prepared to say.

Other members of the team returning to the United Kingdom were Chris Jewell and Connor Roe, both from Somerset; Josh Bratchley, from Devon and Jim Warny, from County Clare.

"We are delighted with [the] successful outcome".